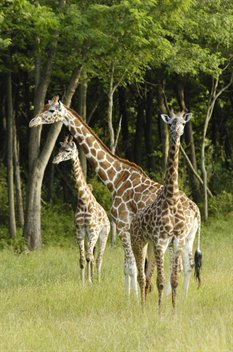 I’m sure most of you watched the unbelievable news coming out of my home town last week, when sheriff’s deputies shot nearly 50 wild animals–including 18 rare Bengal tigers and 17 lions–in a big game hunt across the countryside here, after the owner of an exotic animal park threw their cages open and committed suicide in what may have been one last act of spite against his neighbors and police.

Even Jack Hanna, who I interviewed last year and appeared in this very publication lamented on television saying “It’s like Noah’s Ark wrecking right here in Zanesville.”

Nobody will ever mistake the rolling hills of eastern Ohio for the arid isolated beauty of the Africa, but The Wilds conservation park near Zanesville, Ohio does come pretty darn close to matching an authentic safari experience, minus the 18-hour plane ride.

It’s a private, non-profit conservation center located on nearly 10,000 acres of reclaimed mine land in rural southeastern Ohio. It was created in the early 90’s as the conservation center of the future by a group of civic leaders, political leaders and zoo professionals who believed that a serious scientific approach was required to find solutions to environmental concerns.

The Wilds provides a unique opportunity for guests to experience the benefits of cutting-edge conservation science and animal research work which is fun and educational. Additionally the Wilds practices scientifically based management techniques and breeding programs to promote the health and diversity of wildlife populations. 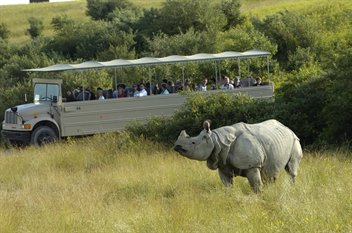 I had the opportunity to tour the Wilds for the first time a couple of months ago since its inception in 1994 and couldn’t have been more thrilled with the experience or proud of the fact it all took place mere minutes from my boyhood home.

After arriving at the Wilds on a beautiful summer morning, I was immediately greeted by Erica my tour guide for the afternoon and after we made our introductions I was given the option of choosing from several different tours that were available to choose from; I selected the open-air safari transport tour and quickly boarded a specially converted open-air bus for an incredible, guided adventure where I was able to view over 30 different species of rare and endangered animals from around the world, including Asian rhinos, giraffes, African wild dogs, cheetahs, Grevy’s Zebra, American Bison and many other threatened animals and birds roaming in large, open-range habitats.

In addition to the open-air safari tour I took, the Wilds offers a sunset safari on Saturdays only and recently the Wilds have begun booking reservations for their luxurious Nomad Ridge; An exotic adventure – Wilds style where guests can enjoy an enchanted overnight or weekend stay in a well appointed private yurt (20-foot-diameter tents with queen size beds, bamboo floor, full baths and electricity) overlooking sweeping views of the Wilds’ animal pasture areas 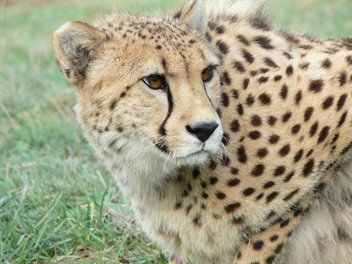 The package includes tour, meals and more and is a wonderful way to spend the night in the great outdoors without giving up the comforts of the great indoors. And the best part of all is that no children are allowed.

Take my advice, visit the Wilds and do your part for global conservation, you’ll be glad you did. The Wilds is located at 14000 International Road Cumberland, OH 43732 near the intersections of I-70 and I-77 in southeastern Ohio.